That title's a Red Green-ism, by the way. Credit where credit is due. Anyhow, this post is mostly a pointless anecdote, but can also serve as a series of tips for any bratwurst-grilling newbie. :^) 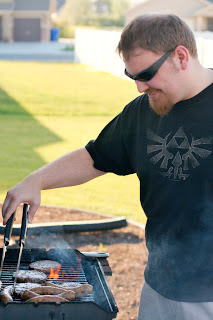 We went to an Independence Day party last night, and I was charged with bringing and preparing the brats. This is a responsibility which I gladly accept anytime, and which I take quite seriously. After all, I'm representing Wisconsin out here. We cheeseheads are a proud, brat-grilling people. We have a rich tailgating culture. Here in Utah, though, there would be no beer dulling the senses of these Latter-Day Saints. Their taste buds would tell no lies. My brats had to stand on their own.

Luckily, I was not without help. A week or two ago, a work buddy introduced me to a local family-owned sausage shop, Colosimo's. A quick drive up towards Salt Lake scored us three packs of high-quality bratwurst. Not to knock the big-name brands; you can get a decent brat anywhere, but these small places survive by being the tastiest, not the most cost-effective and well-distributed. Not surprisingly, mom-and-pop sausage shops are a bit harder to come by in Utah than in Wisconsin.

Now, to someone like me, it's pretty non-controversial that in order to grill the best wurst, one ought to soak them in beer and onions at some point(s) during their preparation. Pre-boiling is common practice, for good reason. I didn't dare go that route though, as I didn't know if the various Mormons I'd be feeding would be comfortable with it. As it turned out, nobody objected to their brat having a good soak in some appropriately-patriotic Samuel Adams lager.

Cutting up an onion was murder on my eyes, but that was good - it meant the little bugger was potent enough to quickly impart its flavors to the hot brats swimming around in the pan. Surface area's the name of the game, the more thin slices the better. Tears of joy, right? :^)

I also made sure to capitalize on my tendency to micro-manage the grill. Rather than turning once or twice, I made sure every brat got plenty of rotation, including being balanced sideways. (You can actually see that going on in Proby's picture up there.) A curved brat can't be cooked perfectly evenly, but it's pretty easy to do better than two charred sides and pink everywhere else.

Using cheese as a brat condiment is a very Wisconsin-y touch. If you ask me, get plenty of colby-jack melted between the bun and the sausage, and there's no need for mustard or sauerkraut or anything else. Cheddar was more popular yesterday, and I won't argue with cheddar. That would be folly. Point is, cheese and brats go together like ... actually, I can't think of much else that goes together that well. Beer and brats, maybe. Or beer and cheese. Oh, got it. Cheese and bratwurst go together like fireworks and the 4th of July.

I received a whole bunch of compliments on the brats, so I must have done something right. We got to digest while watching lots of pretty fireworks go off, both amateur and professional. Celebrating the nation's birthday with grilled meat and explosions, who could ask for more? :^)
Posted by Penduin at 9:25 AM 1 comment: Links to this post

One of the memes buzzing around the hippie geek community lately is a way to stick it to those greedy corporations who think they can own math and such, and who bully everybody with patent infringement lawsuit threats and backroom licensing agreements. How? By brain-dumping ideas publicly. If proof exists of prior art or even that an idea has been published, a patent on it can be struck down.

I don't have any brilliant ideas, but i have some mundane ones that are much more clever than half the crap that gets awarded patents these days. So here they are, at least the ones I can remember off the top of my head, and if any greedy corporation is reading, go ahead and make these things happen, but you can't have patents on 'em. Not for long anyway. They're braindead ideas, documented here as prior art.

Video Projector With Smart Auto-Adjust
Implementation 1: Infrared beacons or reflective tape is built-in or can be attached to all 4 corners of any reflective screen, a small infrared camera in the projector (much like the one in a Wii controller) detects the positions of the screen corners, and software distorts and adjusts the projected image to be the correct shape and size.
Implementation 2: No beacons, but a small camera built into the projector feeds data to software that scans for a big, bright, 4-sided polygon, and adjusts the projected image. Probably the better implementation for most cases. A single unit could be capable of using both methods.

Product Placement in Photo/Video/Art Sharing Sites
My friend's Flickr account contains a photo of someone clearly holding a branded pop can. He deserves ad revenue-per-view as much as advertising agencies do. Better yet, pay individuals for stuff like this and stop polluting broadcast and print media with loud and obnoxious ads.

Non-Fling Fingernail Clipper
The otherwise-standard clipper has a soft, spongy clamp behind the blades, which holds a clipped nail until released, rather than ejecting it at a random, high-velocity trajectory.

Posted by Penduin at 8:42 AM No comments: Links to this post