Chunky Milk Productions strikes again!  We made a movie in a weekend, our fourth in as many years.  And this time, we made the "best of" screening, and even won Best Use of Line.   :^) 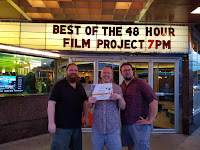 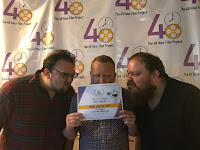 For way more behind-the-scenes rambling than any sane person would ever read, and for various downloads etc, visit my personal website:
https://penduin.net/48hfp/2018

Our drawn category was "silent film", and the required elements this year were:
...We won Best Use of Line with a silent movie.  That's exactly the weird sort of thing I love about these projects, and it felt pretty sweet to pick up an award, even such a minor one.
Posted by Penduin at 10:43 PM No comments:

End of Another Era

Today the internet as we know it begins its official retirement from being a powerful tool of individual voices.  It is being actively repurposed to serve instead as a tool of late-capitalist and autocratic forces.

Not that the internet hasn't been in decline as it is.  Not that long ago, nobody could even take a stab at how many significant entities there were on the internet.  Every university, every business, every city, every artist, every enthusiast.  Protocols kept springing up - telnet, email, usenet, FTP, gopher, IRC, HTTP -- there were many ways to use the internet.  Now, you can count off a small handful of for-profit companies and account for an enormous percentage of the internet, both in terms of traffic and ownership.  Non-HTTP (well, HTTPS now) traffic is actively blocked as some kind of scary unknown.  Where there was once a young and curious power widely distributed to anybody with some basic technical chops, there are now giant silos of control, a select few in charge of nearly everything.

Today, the (ill-gotten, illegitimate, incompetent) US government has made the situation much, much worse.

ISPs, gatekeepers of the final mile of the internet, are now free to return to the corrupt practices they were dabbling in before the FCC's Net Neutrality rules were enacted just a few years ago.  Comcast (or any internet service provider, but they are the ones who bought the current, illegitimate FCC) can now treat any internet traffic any way they like.  Somebody tries using a competing service like Amazon Prime or Netflix?  Maybe slow those streams down, unless somebody pays a little extra.  Somebody's going to a site which compares service across various providers?  It's legal now to send them a censored or altered version of the site.  Somebody's accessing a blog which points out the devious practices ISPs are now allowed to employ?  Maybe just return a 404 Not Found instead.  All legal as of today.

ISPs will tell you people like me are chicken little, crying about a non-falling sky.  We had years of no Net Neutrality rules before and everything was fine!  (Well, during those years, the diversity and distribution of information and leverage on the internet dried up, consolidating into the few giants we have now...)  If I was crying wolf about Citizens United, saying a great deal of money will now be spent lying to us, then I'm doing it again now.  Nah, we don't need regulations protecting citizens from greedy monopolies.  How silly!


I've become less and less convinced that even sweeping electoral victories will be able to wrest democracy back from the GOP - authoritarians do not play by the rules, and we've seen over and again the willingness to lie, cheat, and steal every seat, every gerrymandered district, every judicial appointment, every drop of power to the point where there are essentially no legitimate positions or institutions left.  I'm not sure how that can be repaired.  "Money is speech" really did a number on this nation; I'm an optimist at heart but I have a hard time imagining a full recovery.  One thing that hadn't been systematically corrupted was the internet; damaged though it may have been, there was still technically a level playing field, some small venue in life where money did not have a direct exchange rate with power.  Until today.

The US House of Representatives could still put the kibosh on all this and restore Net Neutrality.  86% of the US population is in favor of those protections.  It's not even partisan.  In this day and age!  86%.  But, that would require several Republicans to do their job, and represent the will of their constituents.  I've called mine, and I hope you'll call yours, begging to restore Title II protections and Net Neutrality, but I'm not going to hold my breath.  We know what we're dealing with here.  An irredeemably-corrupt party at the apex of their hostile takeover of what once resembled a republic.  Even with the most inept leadership imaginable, they've managed to chop up and sell off the entire government to the top bidders.  The internet, though a big deal to me, was just one tiny part of all this.

Of some small consolation is that when the United States is officially over, when every last drop of jingoist marketing value has been squeezed from its corpse, I'll at least still live in Minnseota, which is a beautiful place.  We've got our troubles too, but I think we might pull through, more or less intact.  My also-beautiful home state of Wisconsin has got an uphill battle, as it was the testing grounds for the national GOP takeover, but we're already starting to see the rats flee the sinking ship there.  Wisconsinites are no slouches, and you can't fool all of the people all of the time.  It will be tough, and there is a huge amount of damage to be undone, but I hope and think they'll figure things out too.

Things are likely to get worse before they get better, but my hope is that in that time, as more of the voting public will have grown up having active gunman drills in school where I had tornado drills, as the racists and the homophobes and the other piles of fear and ignorance die off, maybe we can overwhelmingly and legitimately get rid of the currently-invincible, infinite-money-wielding autocratic fascists after all.  I just hope there's something left to save.
Posted by Penduin at 9:37 AM 1 comment: