When asked where I'm from, I've had trouble giving the expected quick answer.  For the last decade, I may have traveled from my home in Utah, but I couldn't bring myself to say I was from Utah.

I do like to say that I moved to Utah for a job at Novell, back when that was a good idea.  I suppose I missed out on their true glory days, but the projects I worked on were exciting.  Netmail was exciting enough that I followed it through various names and to a different company.  Now that company (gradually re-branding itself as "Netmail") will let me work from anywhere.

When we moved, I made a deal with my wife.  This was for my job, and if she didn't want to live here in ten years, we could move.  More than fair.

That was an apartment, a house, and three cars ago.

As it happens, a couple months shy of ten years later, it was time to get going.  Not due to a bargain struck when we moved, but because we each felt and knew it was time.  But I didn't start babbling here to talk about the move and the future - this is about our time out there and what I've learned about the place.

The white elephant in the room, if you'll pardon the awful mixed metaphor.

Until I moved to Utah, I couldn't have told you the difference between a Mormon and a Jehovah's Witness.  They were all just those people who knocked on your door and wanted to tell you about their God.


I know quite a lot more now, and could probably write post after post of sweeping generalizations about the religion and its members, glowing and/or scathing accounts of individuals, or just go on at length about how strange I find this or that piece of doctrine or practice.  I'm quite sure I could do that about any religion though, so I'll just hit the highlights people ask about.


Mormons raised elsewhere find Utah Mormons to be a strange bunch too.  And "strange", I have no quarrel with.  I'm strange myself, and almost proud of it.  I tend to build opinions about churches based on how their members treat others, including non-members.  This is where things can start hitting fans.

While we were moving into our house, a neighbor started chatting with Kim and offering to help.  I emerged from hoisting a box out of the trunk, exposing my beard and my "drink beer" cap.  This neighbor interrupted herself to ask, "Are you LDS?"  We indicated that we weren't, and she turned and left.  I don't think she said another word to us while we were neighbors.  There were plenty of other times where we were snubbed or judged or ignored or just generally made to feel crappy based on not being Mormon, but this is our go-to example.

We also had neighbors who are completely wonderful.  They've treated us as peer human beings from day one, and are just generous and fun people.  They are what I would have previously called quite devout - they go to church every Sunday and attend plenty of other church functions.  Around here, though, that's not enough.  Others in this particular block of houses go to one specific church building, and our neighbors go to another.  They began doing so when one of their children had hearing trouble, since the other church does sign language.  He can hear fine now, but they like the place and still go there.  Some people here look down on these neighbors due to this.  Even more scandalously, the mother had been divorced, and their eldest is even from a previous marriage.  There are families in this neighborhood who don't want their children to play with our neighbors'.

So, in Utah the Mormons are everywhere, but there is quite a spectrum.  Judgmental and closed-minded all the way through as lovely a person as there could be.  Groupthink and tribalism are dangerous, there and anywhere.

I've touched on this a few times before.  I've spent time on roads all across the nation and a couple of places beyond.  I was raised in the polite-as-Canada midwest and have a very strong "get out of everybody's way" mentality.  (This is the recessive counterpart to the easily-spotted "me-first" gene.)  I have never feared for my life as often or as intensely as on Utah roads, nor have I seen such anti-social and self-destructive behavior outside of "reality" TV.

East coast driving can be nerve-wracking with its close quarters.  California freeways have wild speeders and sudden stops.  A number of places have more horn-honking than Utah.  But nowhere else have I experienced so many attempts on my life from negligence and/or aggression.

Like anyone, I find any newly-installed stoplight annoying.  But I would have absolutely welcomed one near our house.  There's a four-way stop, but schools here must not teach people how to count all the way to four.  Or two, sometimes.  Or to look both ways.  Or to look at all.

These bad driver flames are fought with kerosine.  Road signs may or may not mean something, and that something may or may not pertain to the present, local situation.  A lane might be coned off for no reason, a sign may warn of a condition that hasn't been true for a month (if ever), a "right lane ends" sign may announce the left lane being closed, or my favorite, "detour".  Just "detour".  No arrow, no distance, no road name.  Is it for a road up ahead?  Is the street I'm on now part of a detour?  Do I need to turn somewhere unusual?  Is something nearby closed?

I suppose it would be a waste to have clear, well-placed signs since these people are only going to ignore them anyway, but it feels like a chicken-and-egg problem.  Why heed a sign if so many of them lie in the first place?

Presently, Utah is spending its precious few taxpayer dollars (wouldn't want to tax the giant crazy new NSA data center here) fighting gay marriage at the supreme court level.  Utah, the territory which re-defined marriage in order to become a United State.  Highest individual bankruptcy rate in the nation.  Second highest per capita water consumption.  Fastest population growth.  Insane waste and pollution.  All this in a desert.  But the most pressing issue is to stop those monogamous gays.  Yeah, it was time to get out of there.

Given the ultra-conservative politics, one would think the culture would reflect a very individualistic attitude.  I had never come across the concept of a Homeowner's Association until we moved there.  Our house (not anymore!) is part of two HOA's - a master and a subdivision.  Doors in the block must use one specific color and type of paint.  Same goes for fences and patios.  The neighbors we like have gotten citations.  So did the neighbors we didn't like.  So have we.  And part of the appeal of that neighborhood is how little HOA involvement there is.  Most places a person can live out there have very steep HOA fees and strict rules, all in the name of keeping property values up, or looking like proper ant colonies, or something.

And God forbid you want a drink.  In Salt Lake City there are a handful of good bars, including some excellent local breweries.  Beyond that, there isn't much to speak of.  All liquor stores are state-owned, restaurants are not allowed to serve alcohol unless food is ordered, and there are all kinds of wacky drinking laws written and enforced by people who don't drink.

Somehow, in the reddest of red states, we've got this little police state full of people who claim to swear by their personal freedoms.  Maybe it just depends which freedoms.  Concealed weapon laws there are truly American - a pistol in every glove box, and two cops for anytime someone gets pulled over.  One coworker (that I know of) wore a concealed gun at work when I was at Novell.  I don't know if the company was OK with that, I sure wasn't, but the state is.  But maybe I'm just sore about gun nuts since one of them tried to burn down my neighborhood.

I've done enough harping on Utah.  One can find stuff to gripe about anywhere.  What has made these last ten years good, and what we will miss now that we've left, are the people here who have become our family.

The guys I work with and their families have all welcomed us into their lives.  We talk, we barbecue, we play with their kids, we joke about Mormons (the Mormon coworkers moreso than the others!), and we help each other out.


I couldn't dream up a set of people I'd rather call friends.  I'll miss them the same way I've missed my midwest friends all these years. I think "family" is not a genetic measurement, but a living substance that grows and catches on us like a vine.  Whether buried or up where it's visible, it acts as roots and tangles you up.  We've gone, leaving bits of ourselves there, and carrying pieces of others with us.

As Kim pointed out to me the other night, 10 years is not far from a third of our lives.  Plenty of time for personal development.  Though we made new friends and found supportive people, we started out a thousand miles from anybody we would normally turn to.

As I like to say, everything seems like a big deal until you do it.  Our van stopped working in the middle of nowhere.  Kim didn't have her credit card and I didn't even own one yet.  We came out of that OK.  We raised a tiny, neurotic runt of a cat with a huge personality.  We bought, worked on, lived in, hated, loved, and sold a house.  By the time our previous car committed suicide on the freeway coming home one day, it felt like a minor inconvenience.  Entire years might go wrong, and we could laugh it off.

Of course, there have been other things that actually are big deals, whether they're familiar or not.  We had to let go of our beloved runty cat.  We've moved back to the midwest with one fewer parent.  There were scary trips to the emergency room.  There are events where the only option is to grow and come out the other side changed.

As a couple, we've loved each other for what feels like forever.  We've also relied on each other.  Even on the worst days, we each knew there was one solid ally.  We can still worry about changes or situations or possibilities, but I feel like as a couple, we're indestructible.  Whatever is next, we can handle it.

So, we've emerged from our time in the desert.  I'll leave the rest of the allegorical reference there as an exercise for the reader - we've got the next hours, days, years of our lives to figure out.
Posted by Penduin at 1:26 PM No comments:

After some crazy days of packing (weeks, if you happen to be Kim), a day of movers loading most of our stuff, and two days of driving across the country with everything else (including our fish, in a mason jar, in a cupholder)...  We have arrived in Minnesota. 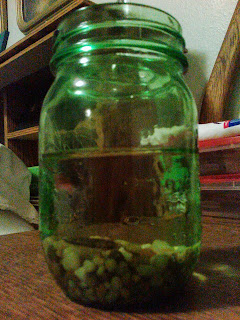 Getting settled, finding more permanent housing, and all that good stuff will happen, but for now we're happy to be done with the long drive, and to have the use of our rear-view mirror back.  :^)