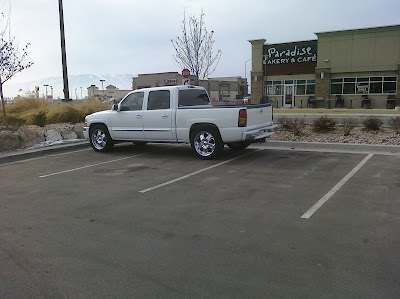 Posted by Penduin at 8:13 AM No comments:

Email ThisBlogThis!Share to TwitterShare to FacebookShare to Pinterest
Labels: utahdriverssuck

You have a quiet and unobrusive nature.

That's my "fortune", according to the cookie I got with lunch today. Really more of an observation cookie, I'd say. At least it was pretty accurate.

I do have a "get out of the way" trait. I don't know if it's a recessive expression from the absence of the dominant and common "me-first" gene, or an overdeveloped sense of personal space, or what. But it causes problems when trying to buy stuff at concerts or when I have something to say but there's never a silent beat in a conversation.

Part of it is as simple as the golden rule. I hate being interrupted, so it feels hateful to do it to someone else. I don't much care for loudness either.

Part of it is basic courtesy. At a busy four-way stop, I can count to four without even having to take my hands off the wheel. Many people cannot, chief among them drivers of large pickup trucks. I find that annoying, but not enough to get assertive about it. Not against vehicles and people that thick.

In fact, my "quiet and unobtrusive nature" is fighting against this post being published. I'm not penning any meaningful statements, making any insightful observations, or even sharing any funny thoughts. I find myself asking why I should pollute the web with this, why I should waste the time of anyone who happens to read it.

Well, nuts to you, recessive genes! I'm posting! That's the way the fortune cookie crumbles!
Posted by Penduin at 1:31 PM No comments:

I'm about 20 pounds heavier than I thought I was. My clothes still fit the same. Maybe it's all beard?
Posted by Penduin at 4:30 PM No comments:

Warning: geekiness and venting ahead!

A few years ago, a very fancy (though unimaginatively-named) gaming machine was released, the PlayStation 3. I got one, for gaming reasons (Metal Gear, primarily) and because it had a novel feature for a gaming console: the ability to run GNU/Linux (or other operating systems as well) out of the box. I get to write and run my own code on a high-end 7-core CELL system? Yes please!

Of course, games are the primary business of the system, but the "Other OS" feature was widely advertised and very appealing to people like me. Recently, though, Sony saw fit to steal that feature away from myself and thousands of other geeky, premium-paying, early-adopting, target-audience technophiles. A mandatory system update removed the functionality completely. (I sure hope Ford doesn't remove my emergency brake, just because relatively few people use it...)

So there we were, a bunch of geeks who want to write our own programs to run on our own fancy PS3s, with the rug pulled out from under us. Well, turns out that us geeks, we're kinda geeky. And some of us are pretty clever. (I use "us" rather broadly there; I personally have only a little knowledge of how the PS3 works.) Long story short, some very bright people figured out ways to once again be able to load and run our own programs on a PS3. What Sony taketh, the community giveth back.

Now, Sony has filed for restraining orders against several of the lead geeks who won us back our freedom. As best I can tell, it amounts to nothing more than a scare tactic. Nevertheless, let's boil down this chain of events:
- Sony: Buy a PS3! You can even write your own software for it!
- Geeks: Yayy! Here's lots of money!
- Sony: Mmm, money...
- Geeks: This machine is great! Gaming AND homebrew!
- Sony: Actually... no more writing your own stuff.
- Geeks: What?! We paid for that, give it back!
- Sony: No.
- Geeks: Oh look, we can still write our own stuff.
- Sony: Lawyers ATTACK!

From Sony's point of view, the new ways of running homebrew are cause for concern, because some folks will very likely figure out how to copy and play retail PS3 games they haven't paid for. (In fact, they already have.) But that's not why I care about it, and it's not why most other geeks care about it. We care because we bought a machine that we could code for, and we intend to keep it that way. We were quite happy with Sony's sanctioned, non-piracy-enabling "Other OS" feature. Once they removed it, what were we supposed to do? Stop being geeks and give up on something we already had? Have you ever met a geek? That's not how we roll.

There is a class-action lawsuit concerning Sony's mass theft, or bait-and-switch, or whatever one wants to call it. But it won't succeed; the law protects wealthy (and foreign, in this case) corporations, not consumers. The homebrew community, all of us still fans of the PS3, simply want the machine we purchased: a beefy system that plays games, shows blu-rays, and runs homebrew.

[update: the class-action case was indeed thrown out.]

That's what you sold us, Sony. That's what we all agreed to. You stole part of our own PS3s from us, and we've taken it back. If you want to sue someone for opening roads that could lead to piracy, go sue yourself.
Posted by Penduin at 11:22 AM No comments: