Preface: a UPS is something a guy like me plugs his servers into. Picture a big heavy battery combined with a short power strip. If the lights flicker, stuff plugged into the UPS stays on.

Admittedly, I bought my last UPS in a rush. I don't actually remember doing so, but I must have picked it up somewhere last-resort-y since it has emblazoned upon it the logo of a certain squad of geeks who shall remain unmentioned. So it was definitely not the best ...purchase, I could have made.

But let us ponder a simple question not even of electrical engineering, but of common sense.
When the device eventually fails, should it become:
a) a heavy, non-battery-backed-up power strip
b) a brick through which no electricity passes whatsoever

I'll give you all a few minutes to think about that, a few more if you work for a blue-and-yellow price-gouging store or their branded-Volkswagen-driving subsidiary.

Did you get it? Do you think that a device, whose entire purpose in existing is to provide uninterrupted power, should be designed to fail in such a way that power will still be supplied? If so, good for you! You have the intelligence of a human being. Have a cookie!

If you got it wrong, then no, I don't wish I'd bought your damn extended warranty, so stop asking! The last thing I want at this point is another identical UPS with aspirations of one day growing up to be a brick.
Posted by Penduin at 11:52 AM No comments:

Since before I can remember, all through school and well beyond, my notebooks and whiteboards and every hotel memo pad I have ever encountered has gotten filled with scribbled creatures. In elementary school, Kris and I filled a notebook with aliens whose names all end in "ork". The closest thing to a "party trick" I know is to have somebody scribble some random lines, and I'll make a drawing out of them. Nearly every time, it turns out to be some sort of weird-but-cute, possibly human-esque, creature.

Nintendo has just released a $7 toy (as a download for the 3DS) which not only encourages me to create all the critters I can dream of, it brings them to life. 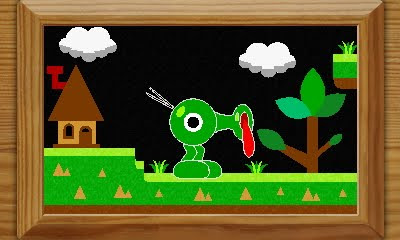 Non-creative types don't get it at all, and perhaps the only audience for this kind of thing is a sufficiently weird person like myself, but I don't care how many peers I have; this thing is pure magic. 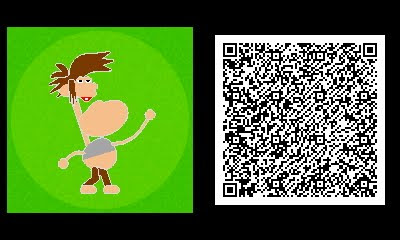 All the critters that make their way out of my brain and onto the screen spring to life and are at my command. They walk, swim, fly, and drive around a world inhabited by other stuff I've drawn, collecting gems for Ork or making deliveries for the Shmoe. Collectibles, secret blocks and hidden treasure chests are everywhere, often revealing yet more stuff to draw and customize as they're found.

I've been known to animate a handful of my drawings. Some have even found their way onto the web. But now, anything and everything I can scribble can be automatically animated and made interactive. I still want to tell stories and do some old-fashioned animation, but the bang for the buck here is unreal.

Thanks, Nintendo, 'cause releasing a new Super Mario, a new Zelda, and a new Mario Kart all within a month here apparently wasn't getting you quite enough of my money. ;^)
Posted by Penduin at 4:00 PM 3 comments:

Email ThisBlogThis!Share to TwitterShare to FacebookShare to Pinterest
Labels: ork

As usual, I advise you to get out and vote. This time I will also add, "while you still can".

Of course I don't expect the institution of voting to disappear anytime soon. There's voting in all kinds of places where there is no actual representative government. The US is simply en route to becoming one of those places. Not that voter suppression efforts aren't also underway.

My guess is that historians and intellectuals, so long as either are permitted, will remember 2010 as the moment the fatal blow was struck to US Democracy. "Money is speech", said the supreme court. "Corporations are people". With that, the influence of us 99-per-centers is on its way out, and the richest of the rich have carte blanche to buy up control and run things as they see fit.

This is actually not a partisan matter, but depending on your views, it's bad for different reasons.

This state of affairs is clearly bad for us progressives, since it means if there's no profit in X, X won't get done. Medicare, social security, education, any and all regulation intended to keep a spark of human fairness alive... If nobody gets obscenely wealthy from it, it's out. Privatize any and all remaining programs. "Privatize" is simply another way of saying "unaccountable government for-profit".

For the "conservatives" (an odd term since they do very little conserving) the picture is no less bleak. Make no mistake, corporate-sponsored government is still government. You hate taxes, but I'm guessing you also hate being nickel and dimed by fees, getting gouged by inflated rates, and being trapped in unfair contracts with no alternatives. And if you think the "free market" will save you, remember that all pretense of fair competition would be long gone if the richest companies had their way. Think it's hard to start a business now? Let's see how it goes when those you'd be starting up against get to write all the rules. You can elect and recall people who tax and regulate you. When corporations pull this stuff, there's not a thing you can do about it.

Of course, there are some things we can do about it at this point, if enough of us realize it in time. We have to understand that from this point on, a great deal of money is going to be spent lying to us, and trying to buy us.

An obscene amount of money. But it's a drop in the bucket to the top 1%.

We still have the vote, and the rich aren't in charge simply because they're rich. Not yet. The campaign will now be to convince us to tear down the things that stand between we the people and unbridled corporate greed. Labor unions and collective bargaining. Environmental regulation. Transparency. Public services and utilities. And most critically, education. The messages will be crafted by the best marketing money can buy. Much of it won't even look like marketing. Those of us seeking to be well-informed will have a steep, uphill battle, since the process of discovering who funded what is already disastrously opaque. We will be lied to every which way. In many races for public office, whether they realize it or not, every single viable candidate will have already been co-opted by profit-driven forces.

Besides the vote, we can move our money away from the giants and into local institutions. This is a pain, but there's help available. Since money and power now have a direct exchange rate, voting with our dollars is one of the few real retaliatory tools we have. Not that there's much stopping the big multinational guys from buying up the small local ones.

The endgame here is simple, and it is the goal of all business: profit. It will be the task of all citizens to be productive and create profit. Not for ourselves, mind you. Profit for those few who already have everything. In order to maintain the status quo and prevent an armed revolt, just enough civil liberties and profit-sharing will be maintained and well-promoted, dressed up in feel-good, patriotic and probably religious language. But liberty as we knew it will have passed. The fatal wound from 2010 is already looking pretty infected. Just look at all the teabaggers elected since "money is speech", currently making great strides in breaking down the government and handing over all the control and money to corporate giants.