As of 8:05 yesterday, I'm a proud owner of a shiny new Nintendo Wii.

Along with two friends (and some 40+ strangers) I actually camped in a line outside a local Target to get my hands on this thing. Even as a gamer, I've never camped out for high-demand stuff before. It's a completely insane thing to do, but my justification for it was this: 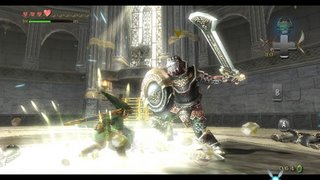 The Legend of Zelda: Twilight Princess. I've always been a sucker for Zelda games, and this one may well be the best yet. I've played enough already to have myself convinced that waiting out in the cold all night was worth it. The controls are both natural and precise, the story's progression is surprisingly powerful, and the art direction is like nothing I've ever seen before. But I didn't expect that I would also be playing a lot of this: 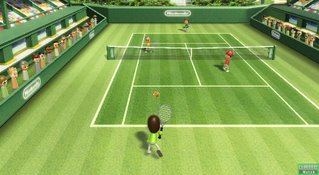 The included-for-free Wii Sports, tennis in this case. Turns out, my wife can't get enough of this game. And there are good reasons. It's ridiculously simple to play - just use the Wii remote as you would a tennis racket. We got to create and play as little caricature versions of ourselves, which are pretty amusing even when they're not doing anything. So when an instant replay flashes in showing a little plastic me (Mii, actually) jumping and swinging wildly at the ball only to land hard on its exaggerated face, and my wife's avatar stepping in to save the day with a scoring lob, laughter ensues. Very simple elements, but very rewarding gameplay.

I am jealous, no wii for me yet :( Thanks for sending a link on your last email to your blog it is nice to keep up with you guys :)

chrishan: If/when you get one, be sure to email me your Wii number and set your Mii's to "mingle". It will be fun to see your little avatars running around.