A while ago (a year? I don't know) I bought a GP2X Wiz. It's a little Gameboy-like device which, unlike most others, is designed to be open for all developers. My first reaction to reading about it was, "hey, I could get TONG to run on that!"

...If that was gibberish to you, TONG is a game I wrote ages ago in which you are tasked with playing Tetris and Pong on the same screen at the same time. It's very hard, and I apologize to anyone who has gone insane while playing it.

Anyway, so I bought a Wiz, with the primary purpose of porting TONG to it. But I got busy, and it became a lower priority, and then it just kind of sat there neglected and forgotten for a long while.

A week or so ago I came upon it and decided to charge it up again, and load it with some games from the internet. Time to see what people who hadn't forgotten about it had accomplished. As I was browsing and downloading various free games, what did I find but TONG! Some crazy person out there had found my game, played it, enjoyed it (at least enough to want a portable version), then dug into the source code and data, made some modifications, cross-compiled it for the device, then shared the resulting package with the Wiz community. That blew my mind a bit. 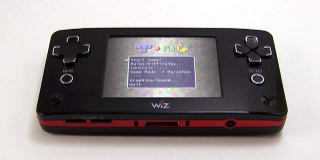 Anyway I'm very pleased. It's a bit of a quick and dirty port, using a slightly older version of TONG and the music was missing, but it runs great! I'm distributing a version of it myself now, with some new features, all the music intact and using the latest code.

Has anyone seen TONG spring up anywhere else? I was hoping to get it running on the Wii at some point, has somebody done that already? :^)
Posted by Penduin at 8:14 PM