As is apparently tradition now, I picked up the latest Nintendo system right away. The 3DS doesn't have very many games yet (though it does still play the older DS library) but it does feature some pretty slick built-in stuff including a Mii creator (a superset of the Wii's) and a 3D camera. 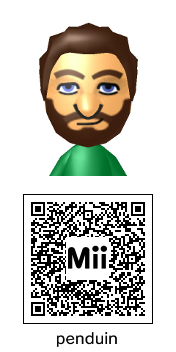 There are also some "AR" (augmented reality) games and toys included, which are pretty crazy in technical terms. This is the kind of device that you really need to see with your own eyes, but I've pulled out the 3D pictures I took and put together a little web viewer for them. These are pictures which literally make you go cross-eyed while looking at them, but I can't think of any other way to show you 3D pictures through your 2D computer monitor. :^)

Also: anyone with a 3DS, I hereby encourage you to import my Mii from that QR code on the right.
Posted by Penduin at 12:28 PM