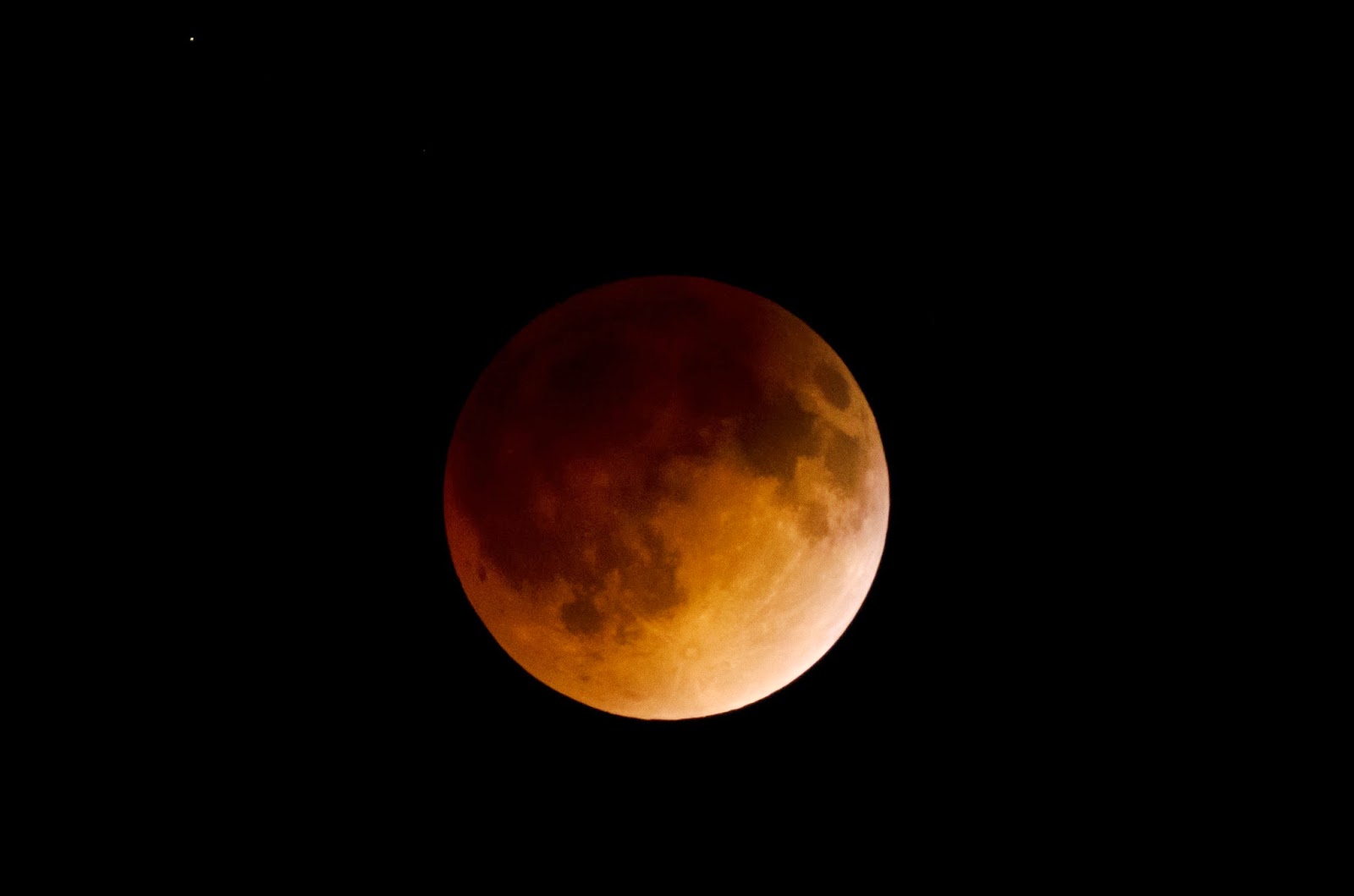 I took a walk around a nearby park last night, with my gaze mostly fixed on our old pal the moon, during its complete eclipse.  I'm very tired today and my neck is as sore as it's ever been, but I'm glad to have done it.

The last eclipse I saw was while I was in college.  There was a partial lunar eclipse with some cloud cover, and a handful of fellow students gathered to see it.  I impersonated the lecture voice of our astronomy professor and said whatever silly, vaguely-scientific-sounding crap I could think of.

This time was pretty different.  Clearer night, no company, and of course a very beautiful and somewhat rare event.  No loud English accent or laughter, just my footsteps and my own thoughts.

Everyone should spend some quality one-on-one time with the moon, whether it's putting on a big show or not.  I let it be a metaphor for pretty much everything.  It's one of life's constants, and it's also always in motion.  It's a mirror of our own little sphere, and it's also in stark, alien contrast to our familiar home.  That reddish shadow was cast by more area than I'll ever visit, and I could cover it all up with my thumb at arm's length.

I let it represent the end.  There have been some tough endings recently.  The reason I was walking alone instead of with my wife is that she's away for a friend's mother's funeral.  She was in the same hospital as my father-in-law for a while.  Both are gone now, but still connected by the people who love them.  And there was our cat.  She went through her own waxing and waning cycles, and slowly moved her sleeping spot in an arc to keep in the sunlight.  We miss her small steps and giant leaps.

I let it represent the beginning.  If my wife stays where she is for a little while, she might get to meet our new nephew.  His beginning will mark the beginning of two new parents.  Great ones, I suspect.  Beginnings are what make us explorers, what make us want to understand the things around us.  Things like the moon disappearing.  Our beginners' ignorance is valuable; it gives us somewhere to test new ideas and build new knowledge.  It's also scary, so sometimes we fill it with comforting nonsense too.

While I walked and stared, I let the moon and its eclipse represent inevitable change, immovable resolution, good, bad, fiction, fact, fear, joy, miraculous, mundane, and anything else i could think of.

I also imagined spouting nonsense in a loud English voice.

"Now we can see that the Earth is not particularly good at shadow puppets.  Never mind dog or bunny, the Earth is only able to do basic shapes like rock, paper, and scissors.  Tonight, it would seem, it has chosen rock."
Posted by Penduin at 7:39 PM