Got to stare at the moon and stars with Kim last night while the moon put on a big show for us.  Last time I saw something like this, I was left to my own thoughts.  While I'm always captivated by any and all celestial dances, everything is made more enjoyable when shared with someone you love.

As it happens, we were also accompanied by a camera which was up to the task this time.  We brought some lawn chairs out to the little park area behind our apartment and watched from full moon through after the umbra had passed by before clouds started interfering.  My tripods are still in storage, so the shots I took were hand-held; 1/10th second exposures were about as long as I could get away with, but I still got some very satisfying photos, including this one. 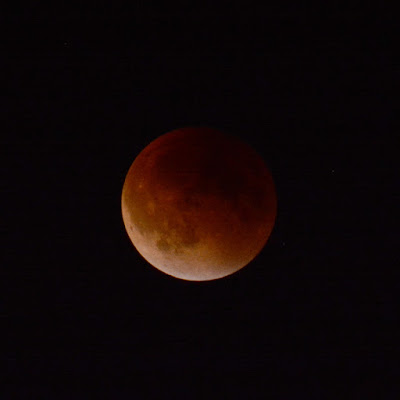 We'd heard "blood moon" among the terms being thrown around leading up to this eclipse, and it really earned its name.

I'll have to play with some of the multiple-exposure shots I took as well.  The camera does have an HDR mode but as I mentioned, no tripod, and besides I don't actually know how to use it yet.  When we bought it, video was my first priority, and learning all the still features took a back seat so distant I still haven't gotten around to it.  :^)  I fumbled around in the dark a good while just figuring out how to get the basic shots I did.

Curiously, at maximum zoom (300mm) I was able to focus behind the moon.  I suppose that means we need to go hunting for Jupiter and Saturn sometime.

(Stars already appear very crisp in these moon shots, so I probably just misunderstand what's going on when I dial the focus past a certain point.  Regardless, gas giant hunting sounds fun!)
Posted by Penduin at 12:15 PM

“Every moment of light and dark is a miracle.”
― Walt Whitman