Gremlins and Chaos and Being

The gremlins in my head, on a quiet day, ask only that I wash my hands a bit more than an average person would.  On a raucous day, they demand that I create something and share it.  They don't ask nicely.  It doesn't matter what I come up with, whether it's any good, or with whom I share it.  This occasionally causes some embarrassment, but one learns to deal with that.  If the gremlins are ignored, they begin wreaking havoc and this fun, grumpy person becomes an un-fun grumpy person.

A side-effect of paying any attention to the world around me is that when the world goes mad, I go a bit mad with it.  Anxiety and dread leak right inside and stir the gremlins.  "Pain is good for art" and all that.  I'm a very fortunate and privileged person, and not what most would call talented, so my use of the words "pain" and "art" is a bit of a stretch.  But that's fine.  In any case, my brain gremlins and I have been on edge lately.

The gremlins are soothed by simple seeds growing into complex patterns.

I played around with randomized, low-fidelity pixel art.  8x8 noise of a single random color, mirrored for symmetry.  The human brain (well, mine anyway) will turn almost any such shape into something recognizable.  A penguin with antlers.  An armored soldier.  A dog walking upright.  A happy toad or a skull with pigtails.  Once I got a bunch of these drawing on screen, it seemed like asking the simple question "who are you?" might be interesting. 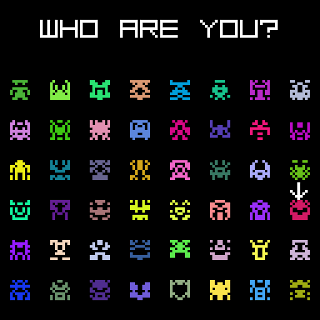 The gremlins like music; during worrisome times, songs get stuck in my head far more easily than usual.  Recently my noggin was cycling this Cat Stevens song, for reasons I won't try to understand.


The bit that kept rolling around in my brain was "if you want to be me, be me".  Might it be interesting to have some kind of interactive mechanic that boils down to "be me" when you meet someone?  Well, I already had plenty of random pixel people to meet. 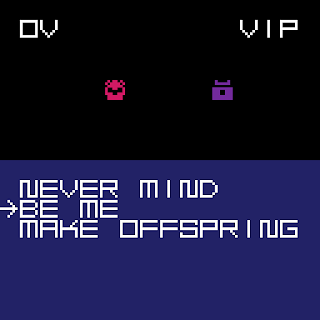 You can see I've got some other stuff going on there too.  Random names, offspring from mathematically averaging the pixel characters.  I also threw something together to randomly build up a map.  And some random special rooms for whatever weird tools and functions I was playing with. And gave each character random traits that determine what and how they can see, where they can go, how they get noticed.

What I do know is that from the chaos, some interesting effects cropped up.  As a moose I traded feet with a bunch of bananas, and suddenly I could go places I could not reach before.  I was a butterfly who talked with and became a spring-propelled robot, after which I could not see the butterfly anymore.  As a thief, I met a two-headed bird and had a screen full of three-headed turtle babies.

It's a bit of a hot mess, but there.  Happy, gremlins?  No?  You already have some more stupid little projects lined up?  Hm.  Gonna be an interesting few years to be me.
Posted by Penduin at 10:49 AM