Autumn is a strange little cat.  There was no distinction in her little head between fun-exercise playing and life-or-death fighting when we first got her.  She's much less rough around the edges now, but when she's feisty, there's a bloodlust and a need for savage close-quarters combat I've not seen in a domestic cat before.  Batting a little ribbon or feather does not cut it in most cases.

In the heat of mock-battle, there's hissing and growling and grabbing and kicking and yelling.  Claws and fangs swing and chomp without restraint.  With my childhood cat, I did this kind of thing by hand, and got a little scratched up.  This one plays ROUGH - bare handed play might end in me bleeding out.  (I have seriously considered buying a falconry glove, but it would need a pretty long sleeve.)


By the by, it is remarkably difficult to A) record video of a cat while playing with her, and B) convince a cat to do even a very usual thing on-command.  This is the best I could get without waiting for her to decide on her own that it was feisty time.

All this brings me to my latest haphazardly-crafted object: Sockmonster Mk. 4! 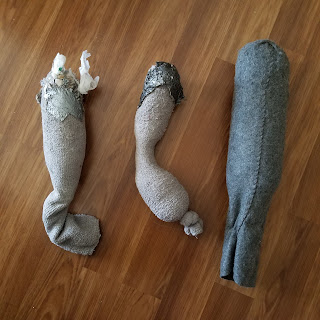 This is the entire Sockmonster family line, or what's left of it.  The original Sockmonster is actually inside of Mk. 2; its skin was a much flimsier and less interestingly-textured sock, and it was the quickest to spill its (mostly plastic-bag) innards.  All but the latest incarnations have had gashes patched up with the handyman's secret weapon, duct tape.

Mk. 2 subsumed the original and added an inner skin of brown paper for extra crunchiness.  Over time the stuffing got all shoved into the end, and indeed began to get ripped out like viscera.

Mk. 3 introduced a semi-rigid spine, a nice thin chunk of plastic that would bend a bit and spring back.  I also attempted to build it with segregated internal stuffing compartments, Titanic-style, to keep the stuffing evenly distributed.  But as you may be able to tell, the mid-point is a very popular kicking target, so the spine broke and the center stuffing compartment appears to have hernia'd out.


For the fourth one, the spine is a towel rolled up as tight as I could get it.  No plastic to wear out and snap.  The stuffing is in one big tube around the spine, and of the whole thing is wrapped in a couple layers of claw-armor burlap and chompy-thick felt.

Originally, I had both ends sewn up, but the thickness and firmness of the thing made it hard to grip one-handed.  Luckily, one end was pretty weak since this whole thing was an exercise in making it up as I go, and Autumn quickly tore it open again for me.  A little stuffing out of that end, squeeze up the sides a bit and boom, handle.  Much better.  :^)  It's a collaborative process, as it turns out.

So, we'll see how this works.  As one might expect, if one were familiar with cats, now that some effort has gone into constructing a more robust Sockmonster, kitty's aforementioned interest in brutal hand-to-hand combat has begun to sharply drop off.  These days she's all about running and being chased.

I concentrated a lot on physical points of failure, but forgot that a cat toy is a failure right away if the little furball doesn't want it.  Still, we'll see.  She has her moods and phases; it may well fall into favor again one day.


Update:
She may not like the thing I spent time and effort on, but boy does she ever go nuts on this $5 grill mitt. 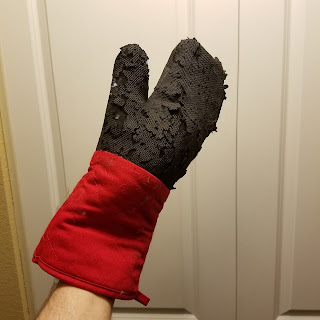 Another update:
We've gotten our $5 out of the mitt, but it now offers very little fang or claw protection. 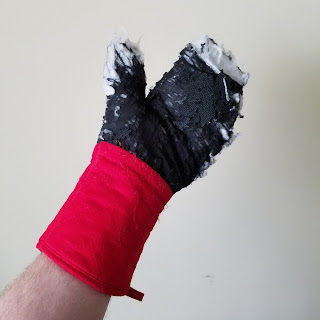