A lifetime ago, we had a sweet kitty who, when boarded at the vet's while we were away, managed to knock over a room full of pet carriers.  Everything survived, more or less, but ever since then our carrier has been suspiciously missing one of the clips that holds it together.

With Murphy, that wasn't a problem since she basically weighed nothing.  Our current kitty, though, has a bit more junk in the trunk, and is going to need proper support when we move, and take her to her overdue vet visit, etc.

3D printers are all the rage, able to turn files from CAD or animation software into physical, strong plastic parts.  I'd like to have one of those some day but for now the closest I've got is a more arts-and-crafts version - a 3D pen that draws in plastic by hand.  It really is to a 3D printer what an ink pen is to an inkjet printer.  With a steady hand and some thinking ahead, it's possible to make useful stuff. 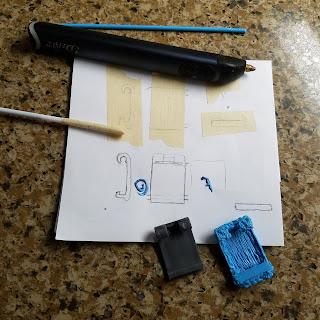 My hand isn't super steady and I don't plan things all that well, but still the replacement carrier clip turned out pretty nicely.  :^) 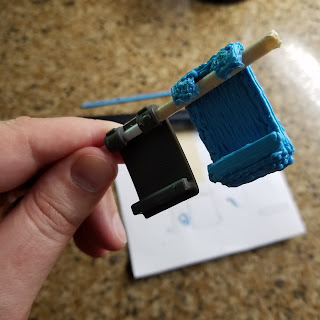 The inside of a pen with a couple layers of masking tape was just the right size to scribble the part's "hooks" onto.  The flat bits are just a matter of filling in a shape on paper (or on masking tape, since the melted plastic doesn't stick to that quite as stubbornly). 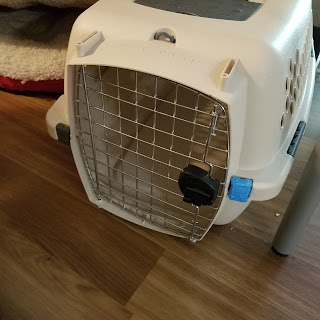 It snapped right into place, just like the "real" one.  If I cared about it being pretty, I could sand it down a bit, but since its lot in life is to clamp together a cat carrier, I called it good as-is.

If it's not a bit dinged up and cobbled-together, it's probably not mine.  (My wife wishes I wouldn't say that, but she's the exception that proves the dinged-up, cobbled-together rule.  :^)
Posted by Penduin at 3:47 PM

I LOVE this! Perfect gadget for you!