This is Book.  So named for looking like he's got writing on him, and since "Boo" and "Bo" for short also suit him.  His mellow temperament also reminds us of Shepherd Book from Firefly. 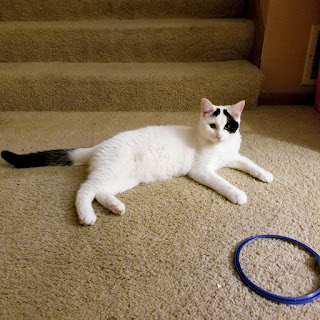 To expand on that particular metaphor, he inadvertently spooks our in-house mental patient, whose most positive reaction to him so far has been along the lines of "keep walkin', preacher man". 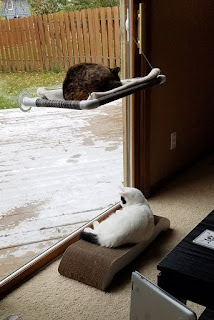 We adopted Book as a late anniversary present to each other, and Autumn (River?  ;^) hasn't fully forgiven us since.  They can be civil at close quarters as long as they're sleepy or getting snacks, but otherwise Book is eager to play and Autumn is eager to growl, hiss, and be a drama queen until pesty little brother goes away.

It will be in Autumn's interests to warm up to him sooner than later, since at 8 months Book is showing every sign that he's going to be a big beefy boy.

Welcome to the family little guy, we're happy you seem to like us all.  ...Even though your big sister's a brat.  ...And your human parents are silly enough to keep adopting you young energy-filled cats. 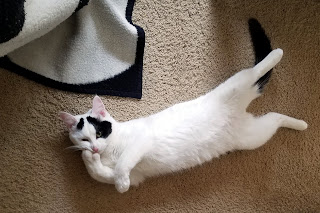