You've been told WHAT?!

Got something interesting (for certain, grotesque values of "interesting") in the snail mail: 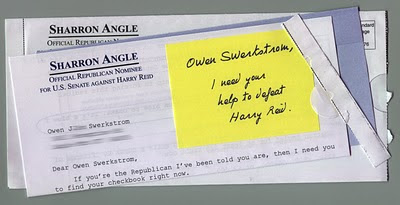 If you don't feel like zooming in, the letter begins:

If you're the Republican I've been told you are, then I need you to...

Now I don't know who's been spreading such rumors, and I've been called a lot of things in my life, but never "Republican". That's just low.

A short while ago, my wife got the same insulting letter, and she figured out the proper response (once she quit cursing). Since this was a solicitation for campaign money, obviously the correct thing to do was was to turn around and give money to the Democrats. And so she did. These folks didn't learn their lesson, they sent me the letter, so now I did too.

We suspect our names were collected from the DMV or something. Just because we live in Utah doesn't mean we're Republican. Or Mormon. Oh, and I only have the one wife. I'm white, that's about all you get.

I suppose it could have been worse. The Teabaggers could have written asking me for money. But apparently the rumors about me haven't gotten so bad that anybody's accused me of being an ignorant-as-hell-and-proud-of-it, racist, homophobic, corporate-puppet, doomsday-cult zombie.

Not sure who to donate to if that letter comes.
Posted by Penduin at 7:18 PM

Email ThisBlogThis!Share to TwitterShare to FacebookShare to Pinterest
Labels: politics